To share your memory on the wall of Hilda Rock , sign in using one of the following options:

Print
Hilda Ann Rock was born on June 23, 1932 to the late Hamilton and Anna George. Another daughter, Marjorie and a son, Frederick were also born to that union. Both preceded Hilda in death.

Hilda graduated from New York Vocational High Scho... Read More
Hilda Ann Rock was born on June 23, 1932 to the late Hamilton and Anna George. Another daughter, Marjorie and a son, Frederick were also born to that union. Both preceded Hilda in death.

Hilda joined St. Thomas The Apostle Church in 1953. She was an Eucharistic Minister and a member of the Parish Council. Upon its closing, she joined St. Joseph of the Holy Family Church where she made many new friends. Hilda became a member of the Catholic Women of Harlem where she served as Financial Secretary.

May the God of all of us, grant you everlasting life and peace in the hereafter, as you know and we are yet to encounter. We loved you but God loved you more.

To send flowers to the family or plant a tree in memory of Hilda Rock , please visit our Heartfelt Sympathies Store.

We encourage you to share your most beloved memories of Hilda here, so that the family and other loved ones can always see it. You can upload cherished photographs, or share your favorite stories, and can even comment on those shared by others.

Posted May 10, 2021 at 09:24am
With deepest sympathy, we remember our Great Aunt Hilda. Sending love, light, and peace from the children of her late niece Linda. 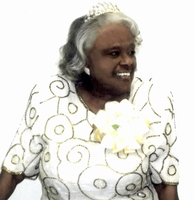