To share your memory on the wall of Gwendolyn McIlwain , sign in using one of the following options:

Gwendolyn attended John Jay High School in Brooklyn and later pursued a career working at The United States Post Office as a Mail Carrier for 25 years until she became clinically ill. She decided to retire early to spend time at home while receiving care. Her time at the Post office allowed her to meet and fall in love with Bill Holland with whom she later had a son, Ashton Holland. Her favorite hobbies were painting and drawing and she had a talent for drawing objects that depicted real life.

She was a member of New Generation Church in Hempstead, NY for over 5 years. She served on the board and was an active contributor.

Gwendolyn is survived by: sister, Roberta; brother, Jeffrey; children, Ashton and Tanika; her adopted (related) daughters, Leslie and Lizzette; a niece; a nephew; as well as numerous extended family members.

To send flowers to the family or plant a tree in memory of Gwendolyn Ann McIlwain , please visit our Heartfelt Sympathies Store.

We encourage you to share your most beloved memories of Gwendolyn here, so that the family and other loved ones can always see it. You can upload cherished photographs, or share your favorite stories, and can even comment on those shared by others. 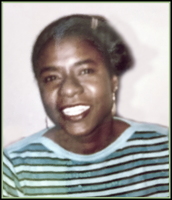