To share your memory on the wall of Milton Petrie , sign in using one of the following options:

Print
Milton Petrie Junior, affectionately known as “Junior”, was born on April 24, 1956 in the borough of Manhattan in New York City. The son of the late Dolores and Milton Petrie Sr. He was the second oldest of six children.

Growing up ... Read More
Milton Petrie Junior, affectionately known as “Junior”, was born on April 24, 1956 in the borough of Manhattan in New York City. The son of the late Dolores and Milton Petrie Sr. He was the second oldest of six children.

Junior loved playing basketball, football, bowling, and other childhood sports like stickball. As classy, cool, calm, and collected Junior always appeared on the surface, he was a man of great depth and eclectic taste.

Aside from his time working at New York Weill Cornell Medical Center in Manhattan, Junior was a loving father to his children, Elion and Erica, in addition to being a cherished uncle, cousin, and grandfather.

You did not experience the true essence of Junior, until you had the chance to accompany him on one of his many adventures, walking through this great city. Many times, those adventures would just sort of “happen”. Another side of him was his profound taste in music, style, television shows, and food - the pleasantries of life. He had a hidden talent in the kitchen - pouring his love in various dishes and treats, such as double fudge cake and fried dumplings - something both he and his younger brother, Gerald, would bless the family with.

Junior was a smart man, well versed on many topics, delighting those he came across with endless conversation. The knowledge this man possessed was beyond what most knew. His heart was bigger than his smile, he would give the shirt off his back without a complaint. Humbled and always dressed sharply. Junior will be greatly missed by his friends and family.

Junior parted ways with us in physical form on Monday, December 21, 2020. He leaves to mourn and cherish fond memories: his son and daughter, Elion and Erica; seven grandchildren; his brothers, Reggie, Gerald, Kevin, Alex and James; his aunt, Sharon; as well as a host of nieces, nephews, other family members and friends.

Junior will be dearly missed by all whose lives he touched,
but remembered in our countless memories of him.
Read Less

To send flowers to the family or plant a tree in memory of Milton E. Petrie Jr., please visit our Heartfelt Sympathies Store.

We encourage you to share your most beloved memories of Milton here, so that the family and other loved ones can always see it. You can upload cherished photographs, or share your favorite stories, and can even comment on those shared by others. 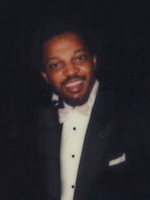