To share your memory on the wall of Geneva Williams, sign in using one of the following options:

Print
After a strong battle with Alzheimer, dementia and cancer, Geneva Marie Anderson-Williams passed away on Friday, September 4th, 2020, at St. Vincent’s Hospital in Jacksonville, FL at the age of 90.

Geneva was born on February 23, 1930 ... Read More
After a strong battle with Alzheimer, dementia and cancer, Geneva Marie Anderson-Williams passed away on Friday, September 4th, 2020, at St. Vincent’s Hospital in Jacksonville, FL at the age of 90.

Geneva was born on February 23, 1930 in Cross, South Carolina to the late George and Maude Anderson. Geneva was the youngest of eight children; Theodore, Preston, Christopher, Daniel, Leroy “Lee”, Ermine and Lotti.

As a child, Geneva enjoyed watching her mother cook, learning to sew and playing out in the field. At 17 years old, Geneva gave birth to her first child, Ertha-lee Anderson. Shortly after, in search of opportunity, Geneva relocated to New York City, making Harlem her home. Once Geneva settled, she quickly identified opportunities of employment as a seamstress in the local factories and secured a place to stay on west 142nd Street.

Over the next couple of years, she gave birth to her second child, Yvonne. In 1953, Geneva married our grandfather, Ranked Military Serviceman, the late Jessie Williams. Together they had three more children: Esther, Randy and Anita.

For those who knew her, all knew that Geneva was a devoted and God-fearing woman. She asked for Gods help, his grace, mercy, gave thanks and praise to him always. Geneva attended The Greater Refuge Temple and was an active member for many years.

As time passed, Geneva identified the opportunity of learning new technology. She educated herself on the mechanics, functionality, setup and the repairing of a new household entertainment system called the VCR. For a short time of entrepreneurship, Geneva came to terms that she would not be young forever. She quickly became open to the idea of learning a new skill and transiting into a new career.

Shortly thereafter, a friend from church recommended that she consider becoming a nurse. Being that she was seldom sick and always had a remedy for an illness, nursing would be a better fit and would not be as demanding as being a technician.

Taking the advice, Geneva studied effectively, and became a successful Registered Nurse. She worked in St Lukes Hospital and as a private duty nurse for many years and was highly sought after and employed by high-end clients on Sutton place, and because she was a highly intelligent woman of business, Geneva TAXED’m everytime.

While fulfilling her work duties, Geneva spent a lot of time with helping to raise her grandsons Sean, Daviion and Jeffery. She instilled a sense of spirituality, education, sewing, and cooking.

As the years passed Geneva continued to work until she retired at the age of 60. In 1992 Geneva relocated to Jacksonville Florida, to care for her only son Randall Matthew Williams, who was ill and later passed away in 1994. In 1996, Geneva took in two of her granddaughters Sharay and CheChe, for a few of years. Geneva was a strong, woman determined to live on her own and care for herself. Seldom did she need anything from anyone for anything at any time. Unfortunately, as Father Time catches us all. In 2014, Geneva was diagnosed with Alzheimer and dementia. In 2015, her youngest daughter Anita moved to Florida from NYC to care for her. Geneva fought a good fight until she was called home to her Heavenly Father. She will surely be missed, she will live in our hearts through our memories, pictures, conversations, and re-enactments of her.

Geneva enjoyed crocheting, sewing, cooking, talking on the phone, going down memory lane and gardening. She made most of her own clothing, hats, curtains and slip covers. Geneva was well known for dressing very fancy. She dressed like every Sunday was Easter. Geneva loved to watch the soap operas. Her favorite shows were All My Children and One Life to Live. She never missed an episode as she had grandson Daviion record and edit the commercials of each and every show. She had a great sense of direction. She never used a map when traveling. Geneva was independent and self-sufficient.

Geneva is survived by her daughters Eartha, Yvonne, Esther and Anita. She leaves behind thirteen grandchildren, thirty-one great grandchildren. She is predeceased by her husband Jessie, her son Randy, great great granddaughter Ashlyn, and all her siblings.
Read Less

To send flowers to the family or plant a tree in memory of Geneva Marie Williams (Anderson), please visit our Heartfelt Sympathies Store.

We encourage you to share your most beloved memories of Geneva here, so that the family and other loved ones can always see it. You can upload cherished photographs, or share your favorite stories, and can even comment on those shared by others. 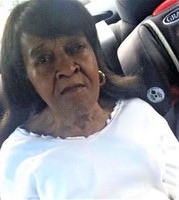