To share your memory on the wall of Edith Ramos-Medina, sign in using one of the following options:

In 1963, Edith “Santi” Ramos Medina migrated to the United States and moved to New York City. Edith met her late husband Eulogio Medina and on September 30, 1966 they were married. From this beautiful union, they were blessed with five children: Ursula (Suly) Medina (deceased), Edith (Janet) Medina, Yvette Medina, Belinda (Bella) Medina and only son Jimmy (Justice)Medina.

Edith ”Santi” Ramos Medina departed this life on the morning of May 22, 2020, after a brief and sudden illness. Our Mom is free from sickness and pain. The families and friends of Edith “Santi” Ramos Medina will truly miss her especially for her beautiful smile, always helpful, telling jokes and just loving her children and grandchildren unconditionally.

To send flowers to the family or plant a tree in memory of Edith Santiago Ramos-Medina, please visit our Heartfelt Sympathies Store.

We encourage you to share your most beloved memories of Edith here, so that the family and other loved ones can always see it. You can upload cherished photographs, or share your favorite stories, and can even comment on those shared by others. 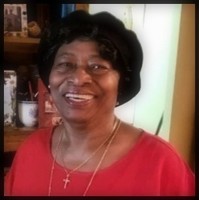