To share your memory on the wall of Catherine Simon, sign in using one of the following options:

She later moved to New York City with her sisters Dorothy and Floree during the early 1950s to better herself. Catherine worked in a button factory and later went to work at a pedal pusher factory. Even while working as a domestic, she graduated to become a professional beautician. She lived in building 2175 of Jefferson Houses in East Harlem. During this time she married Roy Higgins, which lasted for quite a while.

Catherine was a devoted wife, mother, sister, grandmother and friend. She enjoyed taking care of her grandchildren and storytelling. Everyone knew Catherine for her delicious southern cooking and baking, including her sweet potato pies. She was also a devoted member of Canaan Baptist Church of Christ in Harlem.

Sleep on Catherine and take your rest. You will be deeply missed by friends and family. We love you, but God loves you best.
Read Less

To send flowers to the family or plant a tree in memory of Catherine Simon, please visit our Heartfelt Sympathies Store.

We encourage you to share your most beloved memories of Catherine here, so that the family and other loved ones can always see it. You can upload cherished photographs, or share your favorite stories, and can even comment on those shared by others. 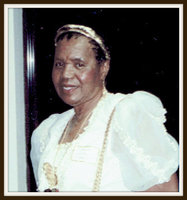