To share your memory on the wall of Lacrecia Drummor, sign in using one of the following options:

Print
Death is not an ending for the believer but the beginning of a new life which has been promised by God, our Eternal Maker.

Lacrecia Drummor was born on May 26, 1978, in New York City to Juanita Isaac and Larry Drummor. Lacrecia attended ... Read More
Death is not an ending for the believer but the beginning of a new life which has been promised by God, our Eternal Maker.

Lacrecia Drummor was born on May 26, 1978, in New York City to Juanita Isaac and Larry Drummor. Lacrecia attended and graduated from Norman Thomas High School and decided to pursue a career in Court Reporting. While pursuing her dream career as a Court Reporter, she held many managerial positions. Lacrecia would eventually go on to obtain her Associates of Occupation Studies in Court Reporting from the New York Career Institute. Once Lacrecia received her degree, she had an extremely promising but short-lived career at the Veritext Court Reporting Agency. Just as Lacrecia started to work and build connections in her career, her dreams were cut short from her untimely passing at the age of 41.

Lacrecia had a big heart and a personality that would be considered larger than life. She had a way of lighting up every room she walked into. In a short time, she would have everyone laughing and having a great time. Everyone and anyone who came into her presence was drawn to her charming and infectious personality. Bold, beautiful, fun, ambitious, intelligent, funny, and brutally honest would scratch only the surface of who she was.

Lacrecia was known to have a way with her words. She didn't bite her tongue for anyone. She would tell you what she thought, whether you asked her or not. However, she had a gift of making people laugh even when she was telling them what she thought about themselves. Either you liked the words she spoke or, you didn't, but she would speak them to you anyway. When Lacrecia spoke, you knew that you were going to hear God's honest truth no matter what!

Her passions in life were her love for her family, reading, gossiping, hanging out with her friends, her great love for good tasting food, playing spades, and a desire to travel around the world. With the time that God blessed Lacrecia with, she touched many lives. Lacrecia meant a lot to many people and was extremely loved. Her presence and spirit was so significant that her physical absence from this world will definitely be missed, but she will never be forgotten.

She was preceded in death by her paternal grandparents, Fred and Annie
Drummond; and her brother, Christopher Stone.

Lacrecia, affectionately known to family and close friends as "Creci," departed this life and gained her wings on February 13, 2020. Lacrecia responded to our Savior's call, "Come unto me all ye that labor and are heavy laden, and I will give you rest." (Mathew 11:28). In a twinkle of an eye, she peacefully slipped into the bonds of eternity.

To send flowers to the family or plant a tree in memory of Lacrecia Drummor, please visit our Heartfelt Sympathies Store.

We encourage you to share your most beloved memories of Lacrecia here, so that the family and other loved ones can always see it. You can upload cherished photographs, or share your favorite stories, and can even comment on those shared by others. 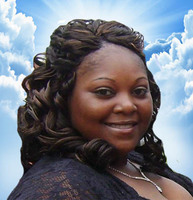