To share your memory on the wall of Nathaniel Austin, sign in using one of the following options:

Provide comfort for the family of Nathaniel Austin with a meaningful gesture of sympathy.

In 1947, Nathaniel moved to New York City with his wife the late Ernestine Austin and his son Ernest Austin where they continued on to grow their family and lives.

Nat was employed by Farberware, Amtrak and later furthered his career at The Port Authority of NY & NJ as a skycap at Kennedy Airport from which he retired.

Nathaniel's life will forever be cherished by those that he left behind: three sons, Ernest (Lois), David (Mercedes), Michael Glen Austin; twenty five grandchildren; a number of great and great great grandchildren; and a host of nieces, nephews, other relatives and friends.

Nathaniel also leaves to cherish fond memories: his special and devoted friend Audrey Sutton, and the "Sutton" family whom God allowed a place in his life.
Read Less

Provide comfort for the family by sending flowers

We encourage you to share your most beloved memories of Nathaniel here, so that the family and other loved ones can always see it. You can upload cherished photographs, or share your favorite stories, and can even comment on those shared by others. 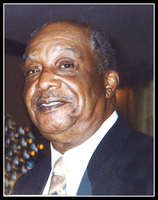